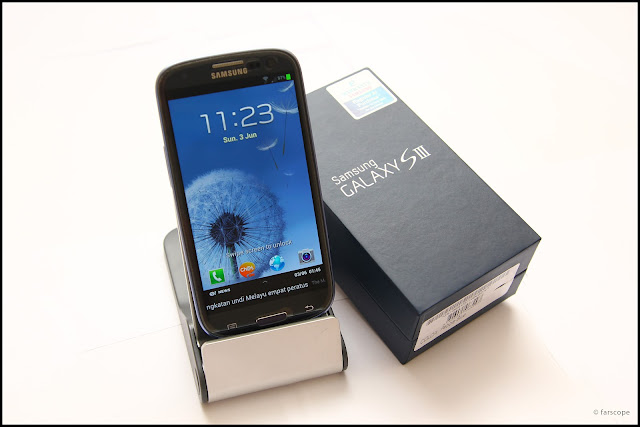 So, we have heard all the good stuff about the improved camera feature in the new Samsung Galaxy S3. So how high is it able to stand against all the other competitors and also how well it is able to perform as claimed?

This time, Samsung boast about the camera's ability too, but not as much as the phones from other brands (hint hint the A and the H), until their ads looks like promoting a camera instead of a phone. Hardware wise, it has an upgraded sensor with BIS (Backside Illuminated Sensor) which claimed to be able to increase light sensitivity to achieve better low light performance. The same 8MP sensor is claimed to be identical to what used in Sony Xperia and iPhone 4S as published in various tech blogs.

However, I won't be doing any comparison because I myself do not own all these phones. Instead, I will comment on how to maximize out the potential of the camera in S3 to bring out the best picture (not the Best Picture function) from it.

As mentioned previously, the Samsung Galaxy S3 has an upgraded BIS sensor from its predecessor, the Galaxy S2. Even thou both phones have the same megapixel count, but the difference in sensor will translate into difference in colour rendering and light sensitivity.

The lens itself is a very slight improve in terms of aperture value when compared to S2, i.e. from f2.65 to f2.6, a very marginal improve. As compared to iPhone 4S's f2.4, and HTC One X f2.0, it clearly shows that the S3 is lacking behind and will not be as a fast shooter as the other two phones mentioned, and it is up to the sensor to increase light sensitivity and image processor to handle with the noise reduction to counter to shortfall of 1/3 or 2/3 stops of light. The smaller aperture size has proven to take its toll in low light shootings in my test and will be explained in detail later.

Taking the aperture value aside, I noticed that the sharpness of this new lens is improved when compared to S2. The old Galaxy S2 has a pretty sharp lens already, and with the S3 equipped with a sharper lens, it is no doubt a great news for its users like me. Even thou most of the sharpness came from sharpening process in its post processing, I still find it very acceptable for those who aren't that picky. In fact, it's a phone camera we are talking about here. Any serious shooting will definitely resort back to a proper camera.

The front facing camera has a lower megapixel count than S2, i.e 1.9MP vs 2.0MP. However, the new FFC is also equipped with a BIS and the output quality is much better than S2. The lower of 0.1MP count equates to better quality pictures, it's considered as an upgrade for me.

Burst Mode
The Burst Mode can take up to 20 pictures at 3.3fps, that means it takes 6 seconds to take 20 continuous pictures. The Burst Mode will require the user to tap on the screen until all 20 pictures are taken or the user can lift their finger as long as he/she thinks that the number of frames is enough. While in Burst Mode, there is an option to select the Best Photo function.

When to use?
- Fast action scenes when you need to capture every moment that is happening.
- Doesn't have time to filter the pictures on the spot and want to pick the best picture later.

Tips?
- Make sure the camera has prefocused at the correct position to avoid disappointed images where the camera focuses at the wrong place.
- Try avoid panning with Burst Mode in low light. Anything shot in low light requires slower shutter speed. Any movement of the camera or the subject will result in a blur image.
- Recommended when have good lighting.

Best Photo
In Best Photo, instead of long tapping the shutter button, the user will only required to tap once then the phone will burst for 8 pictures instead of 20 pictures and it will automatically select the photo which it thinks the best according to its preset judging criteria, which sometimes a hit and miss unfortunately. Nevertheless, the user can always save the other 7 pictures individually if they think they want to keep those as well. 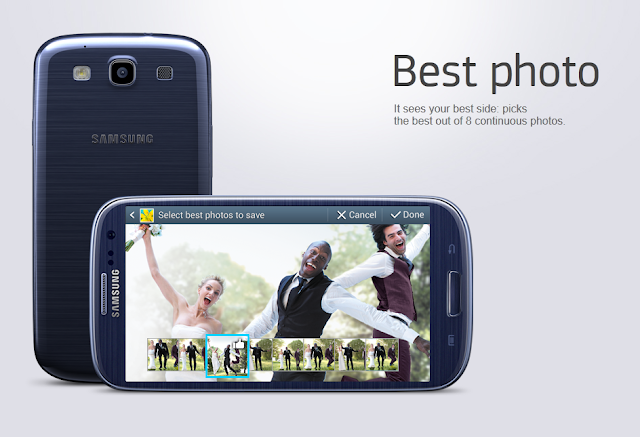 When to use?
- Instead of a set of similar pictures, you just need one best image. Saving storage and time to manually delete the pictures one by one.
- Wanna take a portrait in low light but afraid of hand shake? It helps reducing hand shake because you just need to tap the shutter button once and choose the best one later.
- Wanna camwhore by taking 8 continuous pictures? Use best photo and save all the 8 pictures. Why use Best Photo instead of Busrt Mode? Because Burst Mode requires your finger to be on the shutter button during the whole capturing process, which is inconvenient for posing.

Tips?
- Make sure the camera has pre-focused at the correct position to avoid disappointed images where the camera focuses at the wrong place.


Some social features such as Share Shot, Buddy Photo Share and Face Tagging are some convenient features that can be used to improve the user experience.

Share Shot
Share Shot enables you to share the pictures taken by you to other Galaxy S3 users via Wifi-Direct connection setup prior to it. Meaning to say, you can setup the Share Shot via Wifi-Direct with your friends or family who owns a Galaxy S3 as well before a party or a tour. Any photos taken by you will be automatically shared to their phone as long as the Wifi-Direct connection is active, and any photos taken by them will also appear in your phone as well. This eliminates the process of sending the photos later on after the party or tour. Everything is happening at the same time as the event. No more meeting up later to review pictures and wait for turns to send via bluetooth or cloud storage.

When to use?
- Going to an event or a party with a gang of friends who have Galaxy S3 as well and would like to share all the pictures taken on that time without the trouble of sending it manually at a time later.

When to use?
- When you want instant access to sharing via email. It's a short cut to send pictures directly to the people within the picture. Not a feature that I will use often.

Tips?
- None
Face Tagging
Face Tagging is another feature where the phone will try to detect faces and tries to recognise the identity of the person tagged via the past history of matching the face with people within your contact list. The Face Tagging feature can be disable manually if you dislike your pictures appears with ugly yellow boxes around people's faces.

Voice Command
Voice Command is another useful feature here. Instead of tapping on the shutter button, users can use Voice Command like "smile", "cheese", "shoot" or "capture" to order the phone to take a picture. This feature can be enabled in Settings > Language and input > Voice cmd. This features comes in handy in some occasions, I used it a lot when I'm afraid of handshake during low light, or I can use my voice as a remote control during a group shot, where the phone will be place away from me. Instead of setting the timer and wait for 10 seconds, I simply asked everyone to say cheese and the camera snaps! Then comes the moment of pride when everyone has a shocking expression on their face as if they just witness magic!

The Voice Command also helps a lot in camwhoring mode, where I believe girls will like it a lot. The front facing camera is often used by girls to self portrait and often they faced a problem to tap on the shutter button while holding the phone due to the lack of a physical shutter button. Often they have to risk dropping the phone by holding the phone with two fingers and tries to tap the button with another finger, or simply use two hands in order to self snap, which will destroy their posing. The Voice Command gives an advantage to them because they just need to simply shout out the command and the phone will take a picture for them after 1 sec, which is enough for them to re-pose their mouth expression (if any!).

However, the Voice Command is a hit and miss feature due to the clarity of our voice. For example, my cousin wanted to try out the Voice Command, but when she said "shoot!" a few times but the phone did not respond, then she mumbled "shit you!" then it snaps! So, make your voice command clear!

When to use?
- As a remote control during a group shot instead of using the 10 second timer.
- Avoid hand shake from tapping the shutter button.
- Camwhoring mode where you can pose freely with another hand.

Tips?
- You need to speak clearly or any command that your phone recognizes after you are familiar with it.
- You need to wait 1 second after the phone gets your command. This enables reposing in 1 second for those who need it.